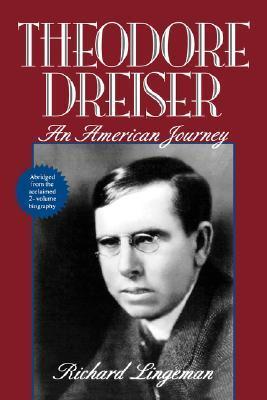 —Studs Terkel
"Scrupulously, massively—devotedly—constructed, everything is in it. And it is immaculately rendered.
—Cynthia Ozick, New York Times Book Review
“An intimate an revealing portrait... a solid, honorable and perceptive book.
—Jonathan Yardley, The Washington Post
“A remarkable book packed with vivid reminiscences, personal anecdotes and thorough research that brings Dreiser’s prodigious, moving story, his turbulent era and the man himself truly alive.”
—Don Skiles, San Francisco Chronicle
“The first volume of Richard Lingeman’s excellent biography now caps the renewed interest in [Dreiser’s] life and his work. It is the most searching biography we have...
—Alfred Kazin, The New Republic
A fascinating documentation of the most troubled life led by any important modern American writer.
—Alfred Kazin, New York Times Book Review

"He had an enormous influence on American literature during the first quarter of the century — and for a time he was American literature, the only writer worth talking about in the same breath with the European masters. Out of his passions, contradictions and sufferings, he wrenched the art that was his salvation from the hungers and depressions that racked him. It was no wonder that he elevated the creative principle to a godhead and encouraged by word and example truthful expression in others. If one were to identify the central, unifying theme of his contradiction-riddled life it was that he was totally subsumed in the role of author. Like many novelists, he was a congeries of different selves, from Hurstwood and Carrie to Cowperwood and Clyde. Moreover, he saw himself and all human beings as characters in the great shapeless novel of life manipulated by the Author/Creator behind the veil.

"He was the most ’American’ of novelists. His hungry curiosity probed the nooks and crannies of the national life, as he sought to perform what he saw as his mission — understanding a large, youthful, dynamic country that had no deep roots in the past and that was in a perpetual state of change and becoming. He retained a deep compassion for the voiceless mass of individuals in this land; their tawdry dreams and desires had for him the beauty of prayers.”
—Theodore Dreiser: An American Journey

Don't You Know There's A War On? The American Home Front 1941-1945
"Those who think they remember Word War II will find it hard to believe they could have forgotten so much that was impressive, touching, cockeyed, stirring, or just plain funny ." New York Times Book Review. "Highly entertaining." Miami Herald "Meticulous and illuminating." Chicago Tribune
Small Town America: A Narrative History 1607-The Present
"Finely detailed, first-rate social history..." (Newsweek) ..."both a wistbul look back and a collection of provocative insights into contemporary values and problems...vivid detail set out in beautifully fluent writing." (Business Week)

Sinclair Lewis: Rebel from Main Street
A sympathetic biography of the satirical scourge of Main Street and Babbitry. "Lingeman's Sinclair Lewis is a model of its kind: vivid, but never overdrawn, written in a lean, wry prose that stays grounded in the documentary evidence"—Wall Street Journal "Readable, sensitive to nuance...A warm tribute to the quarrelsome, interesting iconoclast." — NY Review of Books
"The most important reevaluation of Lewis in more than a generation...It will certainly provide a biographical touchstone for new conversations."
Theodore Dreiser: An American Journey
"it is hard to imagine that anything new or different will be said about Dreiser for a long time to come. Whatever a definitive biography may be, this is surely it."
—Charles Fecher, Chicago Tribune

Double Lives: American Authors' Friendships
Double Lives explores the passions and tensions that have enlivened the most significant, most fruitful friendships in American letters.
Loading…}