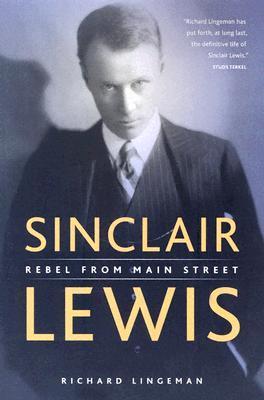 "Richard Lingeman’s new biography of Sinclair Lewis is the first full-scale life since Mark Schorer's, published four decades ago. Lingeman, unlike Schorer, is sympathetic toward Lewis... his assessment and portrait of Lewis are far fairer than were Schorer's."

"In real life, a contrary Lewis came more to resemble one of his own caricatures, but Lewis' latest biographer treats him as a gifted human being — flawed, tormented, and lonely.”
—Roger K. Miller, Minneapolis Star Tribune
"I found myself missing Lewis the more I read about him. There’s just so much cant that he could have sunk his teeth into over the last 50 years: freaky fads in the '60s, self-actualization seminars in the '70s, savings-and-loan scandals in the '80s, dot-com narcissism in the '90s and the backslapping Enron culture of corporate irresponsibility that we are now laboring to get out from under."
—Ted Widmer, Chicago Tribune
"In London during the twenties, Spike Hunt had accused him of seeing only the dark side of small towns in Main Street. Lewis shot back: 'Don't you understand it's my mission in life to be the despised critic, the eternal faultfinder? I must carp and scold until everyone despises me. That's what I was put here for.' Once, when his wife Dorothy Thompson was about to set off on another of her lecture tours, Lewis gave her the following instructions, which she jotted down diary fashion: 'Keep the clear radical line. Awareness of the tawdriness, silliness, immaturity and ruthlessness of this civilization. It is not good enough.' Perry Miller remembered him complaining that he had written twenty-two novels about America but no one cared. 'I love America,' he said, 'but I don’t like it.' It is not good enough.

"But it was all over now. The wandering was over. The invisible elastic band pulled him back. Claude decided his brother’s ashes should be buried in Sauk Centre. It was time to go home."
—Sinclair Lewis: Rebel from Main Street

Don't You Know There's A War On? The American Home Front 1941-1945
"Those who think they remember Word War II will find it hard to believe they could have forgotten so much that was impressive, touching, cockeyed, stirring, or just plain funny ." New York Times Book Review. "Highly entertaining." Miami Herald "Meticulous and illuminating." Chicago Tribune
Small Town America: A Narrative History 1607-The Present
"Finely detailed, first-rate social history..." (Newsweek) ..."both a wistbul look back and a collection of provocative insights into contemporary values and problems...vivid detail set out in beautifully fluent writing." (Business Week)

Sinclair Lewis: Rebel from Main Street
A sympathetic biography of the satirical scourge of Main Street and Babbitry. "Lingeman's Sinclair Lewis is a model of its kind: vivid, but never overdrawn, written in a lean, wry prose that stays grounded in the documentary evidence"—Wall Street Journal "Readable, sensitive to nuance...A warm tribute to the quarrelsome, interesting iconoclast." — NY Review of Books
"The most important reevaluation of Lewis in more than a generation...It will certainly provide a biographical touchstone for new conversations."
Theodore Dreiser: An American Journey
"it is hard to imagine that anything new or different will be said about Dreiser for a long time to come. Whatever a definitive biography may be, this is surely it."
—Charles Fecher, Chicago Tribune

Double Lives: American Authors' Friendships
Double Lives explores the passions and tensions that have enlivened the most significant, most fruitful friendships in American letters.
Loading…}